Wokingham, UK – 27 November 2017 – EnSilica has announced a key innovation that will help the rapid development of autonomous cars.  Its eSi-ADAS™ RADAR Imaging Co-processor will accelerate the commercialisation of autonomous vehicles by solving the current problem of RADAR data overload and resolution by handling this in a dedicated co-processor to enable tracking of potentially hundreds of objects to be made in real time.  It has up to 20x lower power requirements than today’s lower resolution systems and lower system costs, as well as outperforming them in terms of speed and accuracy by up to 10x.  Its importance to the industry was recognised at the prestigious TechWorks Awards on 23rd November 2017 when it won the Automotive Electronics Innovation & Excellence Award. 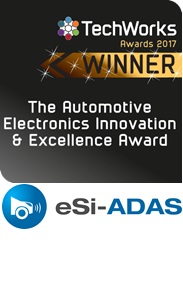 “Until now, we have been under the RADAR, so to speak, with this product,” explained David Doyle, EnSilica’s Commercial Director.  “Our focus has been quietly promoting our ADAS solution into the automotive market.  This has been really successful and elements of our ADAS are shipping in production volume already.  The timing is now right to leverage this adoption and take it to manufacturers around the world, capitalizing on the success so far.  And, winning this award, will help accelerate the adoption of this British innovation that solves a major problem for self-drive cars.”

Advanced Driver Assistance Systems (ADAS) are becoming increasingly complex as they advance from their simple origins of cruise control and parking assistance to fully autonomous driving.  One of the challenges facing OEMs is that a combination of Video, RADAR and LIDAR is needed to cover all operational conditions, which is expensive. This is because current RADAR sensors lack the imaging capability, 3D and 360° coverage that is available from LIDAR but LIDAR does not work well at night or in fog so the two have to be used in conjunction with Video.  This creates a problem of large amounts of data that needs to be processed in real time.

David Doyle added, “EnSilica has done a number of projects for customers in the automotive area and it became clear to us that there is a need for a solution for the autonomous/self-drive car market to effectively handle the huge amount of real time data needed to provide an accurate picture of the surroundings of the car so that it could drive itself.  Also, by improving the resolution of the RADAR part of the system, the need and cost of the LIDAR component could potentially be removed, providing significant system cost reduction.”

However, increasing the RADAR resolution creates even more data that uses up most of the capacity of the system’s central processor.  EnSilica’s innovation is to design a dedicated co-processor that is optimised to handle this particular type of data.  It is a similar solution to that used in computing of having a general processor and a dedicated graphics processor unit (GPU), and EnSilica has filed a patent to protect its innovation. 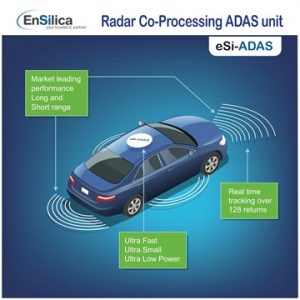 The co-processor chip offloads the RADAR target tracking from the car’s Electronic Control Unit (ECU), freeing up ECU resources to concentrate safety critical decisions such as target identification and fusing RADAR data with camera video information.  The benefits include lower system cost, lower power requirements and faster precision real-time tracking with an ultralow maximum latency of 20ms to enable critical safety decisions to be made with confidence.

As a result, EnSilica’s solution has high resolution image sampling capability, elevation and 360° coverage from multiple sensors, plus it works at night and in any weather conditions. The result is a  detailed RADAR map of the kind needed for future autonomous vehicles that works in conjunction with a video system.  The co-processor chip can support up to 256 virtual antennas in a 3D array with ADC sampling rates up to 100 Mega samples per second of raw data.  This provides coverage for parking and short and long range RADAR in a multi-mode sensor, removing the need for and costs of ultrasonic sensors for parking.

The eSi-ADAS™ Imaging Co-processor has dedicated mathematical hardware engines to demodulate the RADAR signals using Range, Doppler, Azimuth and Elevation Fast Fourier Transforms which are then detected and the resulting measurements are tracked using a high performance Kalman Filter. This means that the final output is a low data rate object list with position, speed and confidence values for over 128 objects that can be used by an ECU for sensor fusion with other RADAR object lists or images.  To provide the most precise plot extraction, eSi-ADAS operates in conjunction with modern, fast chirp-capable RF devices.  EnSilica has filed patents on chirp processing techniques to overcome drawbacks usually associated with processing fast chirp modulation, notably its high computational and memory requirements.

Advancing the development of self-drive cars

“Our ADAS Co-processor provides a faster time to market for chip and system developers together with manufacturers of autonomous cars,” concluded Dr David Wheeler, EnSilica’s Technical Director.  “eSi-ADAS is easy to integrate and provides a lower system cost, especially as LIDAR is potentially no longer required, and up to 20x lower power requirements than existing solutions as well as significantly outperforming them in terms of speed and accuracy.  This innovation provides a major step forward towards cost effective, safe, self-drive cars as it provided a dedicated solution to handling the previously, almost overwhelming, amount of data.  With this processing burden offloaded and the provision of almost instant awareness of the surrounding, the self-drive car is now much closer to commercial reality.”

EnSilica has built its reputation as being of the leading silicon design houses and is now managing the entire process right through to supply for many of its customers.  The eSi-ADAS RADAR Imaging Co-processor is one of the next generation products developed by the company to sell itself rather than for a customer. This can be either as IP to be integrated onto a customer’s chip or as a stand-alone chip from EnSilica.  This is a major shift in the company’s business model and is designed to add regular income streams from the sales of its own proprietary products based on in-house, innovative technologies.

eSi-ADAS is a trademark of EnSilica Limited

Because these cookies are strictly necessary to deliver the website, refusing them will have impact how our site functions. You always can block or delete cookies by changing your browser settings and force blocking all cookies on this website. But this will always prompt you to accept/refuse cookies when revisiting our site.