You are here: Home1 / Featured News2 / EnSilica on a new growth trajectory with next round of funding

EnSilica on a New Growth Trajectory with Next Round of Funding

Microchip designer EnSilica wanted to take the next big step in its growth story. But it could only happen with the right people and funding in place…

Next time you pick up your mobile phone or get a reminder that your car is moving out of its lane on the motorway, there is a good chance that an EnSilica-designed microchip is managing the authentication or radar technology behind that experience. And thanks to their recent move up the value chain, there is a good chance that EnSilica will also have supplied that chip, having overseen all elements of its manufacture.

That’s because, nearly 20 years after EnSilica was founded in the shadow of the dotcom bubble bursting, the company took a major step forwards that would put it on a new growth trajectory. Fortune favours the bold, with a little help from Shaw & Co.

So, Where Did it All Begin?

Back in 1991, Ian Lankshear graduated with a first-class degree in Electrical and Electronic Engineering. He started working in the exciting and  rapidly  growing world of technology for global leaders such as Siemens, Hitachi and Nokia. First, designing conventional hardware and then he began to focus on application-specific integrated circuits (ASIC), which are microchips designed for a special application. There are many advantages to building a custom chip rather than using off-the-peg alternatives, from using less power to making the product more compact and effective. And, of course, for many new and specialised uses, there is no ready-made option.

After the dotcom bubble hit, Ian decided  to set up shop with two colleagues to offer consultancy to semiconductor companies. EnSilica was born, based in Wokingham, near Reading in 2001. Initial work in the telcoms sector evolved as the digital age began in earnest and the business started focussing on new technologies associated with flat screen TVs, which required silicon chips designed to meet their specific needs.

It was a great and growing industry to be in as demand for chips grew exponentially, especially in the automotive, telcom and medical markets that EnSilica had gravitated towards. As is often the case, however, this attracted greater, and increasingly global, competition, particularly from India and the Far East. As purely designers of ASICs, the firm’s margins risked being squeezed and their revenue growth limited by the number of engineers they employed. 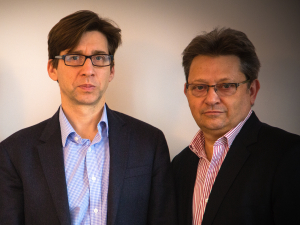 Ian had already worked out a possible solution, but he needed the right partner to help him refine and deliver it. That was when a chance meeting came in handy. “I first met Mark in 2014 when I was looking for some funding for a cryptocurrency project and he was heading up an investment business,” says Ian, referring to Mark Hodgkins, who went on to join EnSilica as Chairman in 2016. Highly knowledgeable and experienced, his career includes time as a partner at both EY and Grant Thornton after qualifying as a chartered account.

Although nothing came from that initial meeting because, hard as it is to believe now, the prices of cryptocurrencies kept falling, it did start a conversation. One that soon identified Mark as the person to join Ian and his team to help the business take the next step.

Mark defines the problem they faced in terms of shareholder value. He explains: “Price multiples for a business that is just a design house are relatively low. You might get at most 10 to 12 times profits, and those profits are getting smaller as competition squeezes margin.”

All agreed that EnSilica needed to move from pure ASIC design to designing and supplying the chips. Because, by making that step, rather than just a one-off design payment, they would generate revenue throughout the lifetime of the product. For example, if the microchip was used in a car, then throughout the typical five-to-seven- year production life of that vehicle, the manufacturer would keep ordering more microchips from EnSilica. Shareholder value would rise correspondingly. “Because there are long revenue streams that you can see out into the future, these type of businesses get valued on a multiple of revenues, rather than profits, adding value for shareholders,” explains Mark.

Even with Mark’s financial expertise and Ian’s technical knowhow combined, there was still one problem. The gap between winning the business and delivering the final products was longer. “We’ve got to win the business, then design the products, then wait for them to be manufactured before we start to see the more profitable revenues,” explains Mark. “That requires quite a lot of capital,” adds Ian.

The Role of Shaw & Co Was Critical

That meant having enough funding in place to make the transition safely and successfully. “Banks don’t generally like lending to companies in this situation, because they see it as taking an equity risk into the development of the chip”, explains Mark, who was then introduced to Shaw & Co.

“The role of Shaw & Co was critical to our success. By helping us source unsecured debt we were able to bridge the funding gap created by our growth strategy,” says Mark. Shaw & Co advised EnSilica on a £3.7m, unsecured debt raise funded by specialist lender Caple. He adds that Shaw & Co’s management of the process and their understanding of the business was also vital to achieving the desired outcome.

With the right funding in place, it helped EnSilica deliver on the design and supply contracts it had secured in its established markets, as well as playing an increasingly important part in a new one: the lower earth orbit (LEO) satellites that typically orbit 500 to 2,000 kilometres from Earth, providing high speed communications. EnSilica chips will soon be found in the ground terminals that pick up the signals.

Set For An Even Brighter Future

With operations in Wokingham, Oxford, Sheffield, Cambridge and India employing around 100 people and a cabinet full of trophies including a Queens Award for International Export, the future looks bright.

Even COVID-19 has had a limited impact on the business. “Working remotely is not a problem and we have been able to make sure all our people are safe, but customers did delay investment decisions during the first lockdown, which knocked us off course a little. But we are now seeing these come through again, despite the current lockdown,” says Ian.

COVID-19 has also accelerated technology trends, increasing demand for autonomous vehicles and other equipment. This plays to EnSilica’s strengths and will help it continue its steep growth trajectory as the markets  in which it operates expand. Autonomous vehicle production is anticipated to expand at a compound annual growth rate (CAGR) of 63.1% from 2021 to 2030, while the global ASIC Chip market is projected to reach $28.05 billion by 2026, with a CAGR of 8.6%.

“We won’t be the largest company in the world but we don’t need to be. We specialise in particular areas and that’s why people come and seek us out,” concludes Mark. Talking to Ian and Mark, it’s clear that their combination of technical and financial expertise will enable them to seek out and profit from new opportunities far into the future.

Because these cookies are strictly necessary to deliver the website, refuseing them will have impact how our site functions. You always can block or delete cookies by changing your browser settings and force blocking all cookies on this website. But this will always prompt you to accept/refuse cookies when revisiting our site.